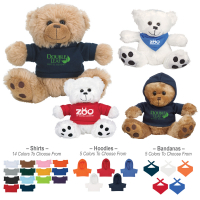 What it was purchased for: A bank chain needed a product for tellers to hand out to new account members.

How it was distributed: These teddy-bears were given to new accounts specifically targeting college loans.

Result or ROI: This is still an active program. It’s a small bank with several branches. It’s been a great ice breaker to get people to sign up. These banks are typically in grocery stores and people stop for a bear promotion.

What it was purchased for: A local financial institution needed a giveaway item for current and potential clients. It had to be useful to keep their name in front of the clients and also lasting.

How it was distributed: The phone stands were taken to industry trade shows and handed out.

Result or ROI: Many compliments were given after receipt of the phone stands, and the booth made some buzz around the show floor. Booth attendance was higher than previous years.

What it was purchased for: A mortgage firm had planned an incentive trip to Cancun, Mexico for their top producers. In addition to the trip, they put together a gift bag. A branded Fisheye Lens Set was chosen as a unique gift.

How it was distributed: When the top producers arrived in Cancun, they were presented with a gift bag of branded goodies. This gift bag included the #2850 Fisheye Lens Set.

Result or ROI: The Fisheye Lens Set was a hit! The employees were very impressed with its functionality and took amazing pictures on their trip. The firm in turn used these photographs to further incentivize their team for the next year!

What it was purchased for: A credit union wanted to target college students and offer them an incentive to open a new account. They chose a stock design, “Laundry Method for College Students” that gave basic tips and instructions for washing clothes, along with their logo.

How it was distributed: It was given out at the time of opening a new account.

Result or ROI: The concept was so creative and successful that the word spread on campus and increase of new accounts were up 20%.

What it was purchased for: A welcome back to the office gift

How it was distributed: Paired with an umbrella distributed inside of the bag

Result or ROI: “The bags are being used daily for carrying of laptops, lunches and daily necessities!” “Umbrellas are also around the office around desks and used as needed”. “They were a huge hit!”

What it was purchased for: A welcome back to the office gift

How it was distributed: Paired with an umbrella distributed inside of the bag

Result or ROI: “The bags are being used daily for carrying of laptops, lunches and daily necessities!” “Umbrellas are also around the office around desks and used as needed”. “They were a huge hit!”

What it was purchased for: A bank in a community of about 25,000 people wanted to do a product that would give them good exposure, and have some good shelf-life and be distributed in a very efficient way throughout the community.

How it was distributed: The bank had bought things in the past and found that "over-the-counter" distribution was slow and not very efficient. Distributor rep went to the bank with a great idea. He showed them the 6223, Malibu sunglasses. He said that if the bank would put their name on one arm of the glasses and the school name and mascot on the other, he would meet with the high school's booster club, and since the club has a merchandise table at all the high school football games, the club could give these glasses to every attendee at the game. Of course the glasses would be in the school color. Since this was a large class school, the attendance at games was 4,000 - 5,000 people, with the students comprising at least 1,000 of the attendees.

Result or ROI: Bank loved the idea of providing the high school's fans with a product they could wear, and the idea that over 2,000 people would be wearing an item that had the bank's name on it. Distribution could be handled at one game. Result was that the bank purchased the glasses and the booster club was all for doing a give-away that would draw people to their merchandise table. Everybody involved won! Fans got a free product that they could wear. Booster club got a product to give away that would draw clients to their merchandise table. Bank got their name and goodwill out into the community at a single game. 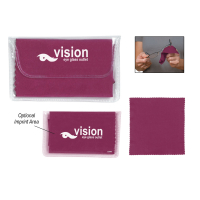 What it was purchased for: A financial institute needed giveaways for employees during Security Awareness Week.

How it was distributed: They inserted an informational card into the case. It contained the following info: Spam – just delete it Always lock up Know Fraud Calls Help Client Confidence Abound

Result or ROI: The microfiber cloths were well received by the 33,000 employees. Each time they clean their device screens, they are reminded of these important procedures.

What it was purchased for: A gift that was not gender specific and was useful and could be branded and had a high-perception of value.

How it was distributed: A Distributor was working with a bank who asked them to bring to them ideas for an incentive gift. The bank wanted to set-up an incentive gift to give to new depositors who opened a new account at the bank for over $1,000.00. They were looking for an item that would be useful and a gift that would have a high perceived value. The gift had to be one that would work for both men and women. The bank had established a budget of $20.00 per item. The bank projected that over a 2 month period they would set a goal of 200 new accounts. Obviously, this item would need to have the bank logo on it, so it would need to be branded. The distributor came to HIT Promotional Products for ideas and they decided on HIT Item no. 7039, Auto Safety Kit. This product addressed all the parameters that had been set-forth by the bank. A gift that was not gender specific and was useful and could be branded and had a high-perception of value.

Result or ROI: The bank was able to achieve their goal of 200 new depositors in less than the 2 month time period they had targeted. 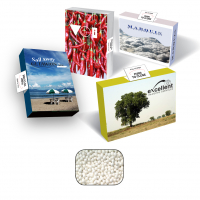 What it was purchased for: The Bank of Newport is a small bank branch that serves the southeastern area of New England. They were established in 1819 and have only 12 bank locations, mostly in Rhode Island. Their challenge over the past years has been to secure more local customers to their community bank by recruiting them away from the large bank branches that have permeated the area. The Bank of Newport wanted an economical promotional gift because they do not have the vast budget of their competitors. They also wanted the product to be useful and endearing to the residents of the area, demonstrating to them that they actually care about the community. The bank has always prided itself on their community efforts and help sponsor numerous events throughout the year. The gift was to be given away at the Newport Bank booth at several of these community festivals during the spring/summer months. Newport contacted their promotional product distributor who then made a call to Admints & Zagabor to find a product that fit the needs of the bank.

How it was distributed: The promotional product team decided that Newport needed a product with resale value and that the product had to prove to the patrons of these neighborhood events that Newport cared about them, unlike the other larger banks in the area. Eventually, the team presented Newport with the advertising mint box (AB25). The mint box contains 20-25 peppermints, is recloseable, and is fully customizable on all 5 sides of the box. The mint box offers more advertising space than most products and is printed with 4-color process printed. A box of mints like this is often purchased in the store for over $1.

Result or ROI: The mint box promotion helped to further establish the Bank of Newport as the preeminent bank for the people of southeastern New England. It was distributed at the Newport booths at several sponsored events through the spring and summer. The advertising box was useful and compact enough to be placed in purses and pockets. This way the potential customer would remember the company name and logo days after the event. After the promotion, the Bank of Newport received many compliments on the product and requests for more by the community. More importantly, the bank saw a 10% increase of new customers in the fall. Newport was so content with the product that they continue to use the promo product team for future promotions.