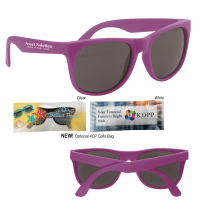 What it was purchased for: A vampire-based television show hosted blood drives at outdoor events. These were given out to donors upon arrival as a giveaway.

How it was distributed: It was given to anyone who gave blood as both a thank you and a reminder to watch the television series.

Result or ROI: Anyone who spotted someone wearing those glasses was willing to do what they had to do to get a pair and they came over to donate.

What it was purchased for: Sunglasses were desired for a giveaway from a country music television channel at a music award ceremony

How it was distributed: Both models of sunglasses were handed out at various events as fan prize giveaways

Result or ROI: The sunglasses were well received. This gave the channel more brand recognition and some satified viewers.